Note: The demand data below is reflected through February 23rd, ahead of the CDC announcement raising the travel advisory level for Italy, Japan, South Korea and Iran. The impact of this announcement will be included in the next update from Hopper.

US Demand and Price Impact

Demand from the US to China fell rapidly with the news of the Coronavirus, but the drop has stabilized in the last 2 weeks, at a level ~48% lower than early January levels. Demand is expected to remain low until the virus is contained and government and health officials like the CDC and WHO indicate it is safe for Americans to travel.

Round trip airfare from the US to non-Chinese destinations in Asia also spiked in early February as the news of the virus spread globally. Since then, prices to most destinations have peaked and are returning to more expected seasonal levels. Demand to these countries, however, continues to fall from -8% to -38% in the wake of the spread of the virus. 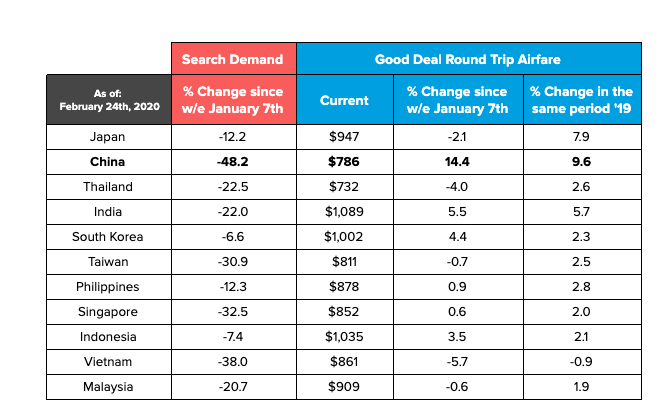 To see the impact on more destinations, follow this link. 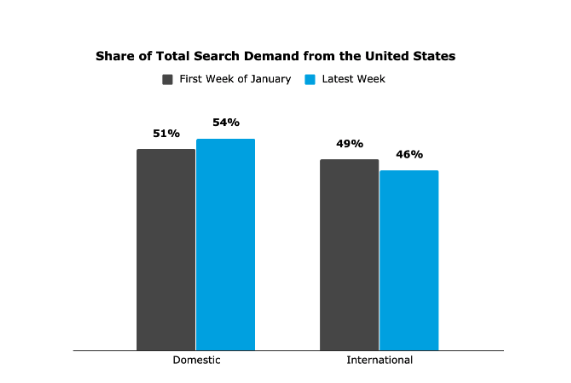 Nearly 5% of all international capacity from the US in the next 2 months was planned to route travelers to China. Some of these travelers were headed onto further destinations, primarily across Asia and Southeast Asia. Our ranking below shows the international destinations where flights with connections through China have previously represented a large proportion of the available routes US travelers could fly to visit.

Read as: Nearly 50% of all route options for travelers flying from the US to Ho Chi Minh, Vietnam have a connection in China.

As Coronavirus has spread beyond China, parts of Europe have begun to feel the impact of this fast spreading virus. Within Europe, demand has already begun to shift as concern over the illness grows. Since the first week of January, demand for travel from Europe to rest-of-world destinations has dropped -5.1%, while demand for intra-European flights has grown slightly, +0.9%. This has led to the proportion of searches for travel outside of Europe to drop by 2% points in just 8 weeks, from 50% to 48%. 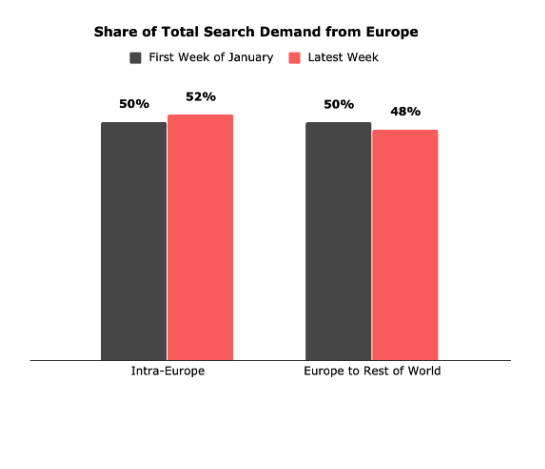