HomeCompanyPeopleCareersDownload
Which Airline Has the Most Comfort and Customer Satisfaction Per Dollar?
En
Search

Hopper has looked at ticket prices, customer satisfaction, and seat pitch and size for 10 US airlines to figure out what travelers get for their ticket price and to see which airline provides the best deal for the most comfort and satisfaction.  The study includes Spirit, Frontier, AirTran, JetBlue, American, Virgin, USAirways, United, Delta, and Alaska Airlines.  The notable exception from this list is Southwest which is not included because it does not share data with GDSs. Looking at base ticket price (does not include airline fees), Spirit Airlines is the cheapest large domestic airline followed by Frontier and AirTran (Figure 1). 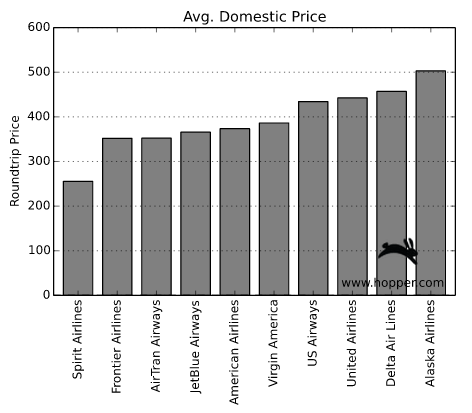 Figure 1: Good deal price for domestic U.S. airlines (April and May 2014) *this analysis does not include every US airline

The least expensive airline can change based on what amenities travelers select and what fees each airline charges. Ranking the airlines by total ticket price when a carry-on, two checked bags and seat selection fees are included, JetBlue becomes the least expensive major domestic airline followed by Virgin America and AirTran. Spirit Airlines falls to 6th place, while Delta and Alaska remain at the bottom.

The actual total ticket prices will change based on what route travelers take and also what specific amenities they choose, which affects the fees charged. Hopper has built an airline fees calculator to help fliers pick the best airline on a route with fees factored into the cost. 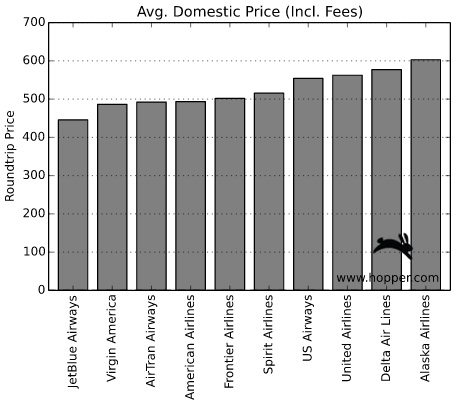 Figure 2: Good deal price for domestic airlines (April and May 2014) with added fees. 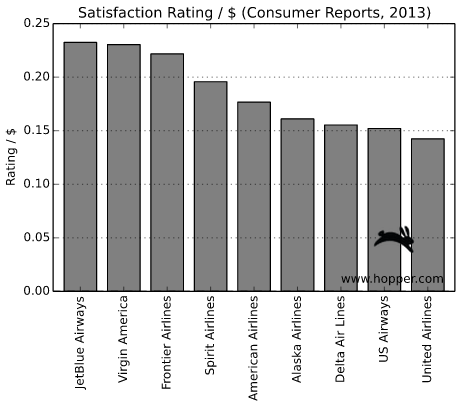 Figure 3: Satisfaction rating per dollar (Using 2013 Consumer Reports and 2014 April and May prices) 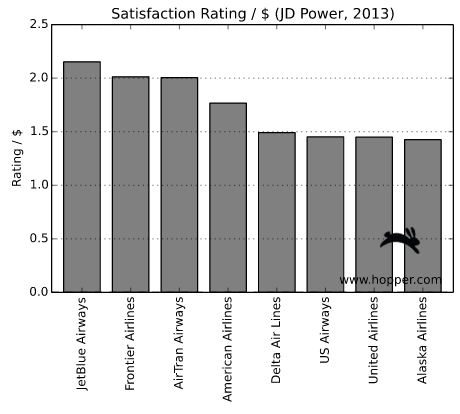 We also looked at “cost per seat inch” and “pitch” on the top five domestic routes. We found that that JetBlue has the largest pitch and seat area and Spirit has the smallest. On a dollar/pitch basis, Alaska is the worst and AirTran the best. On a dollar/area basis, US Airways is the worst and AirTran the best. Note that Spirit Airlines “Extra Room” option gets fliers an additional 8" for $12-$199 dollars. If travelers can get this option for under $100, they’ll get the largest seat available at 36" pitch for a below average price (not adding in any other Spirit Fees).

The flight price data presented in this analysis comes from Hopper’s combined feed of Global Distribution Service (GDS) data sources which includes about 10 million queries and 1 billion trips per day. Demand is represented as the number of queries not actual ticket purchases, and is calibrated across all GDS sources for each market. Good deal prices are represented by the 10th percentile prices. For example if the 10th percentile price is $800 dollars it means that only 10% of trips are priced at or below this price.

The study includes Spirit, Frontier, AirTran, JetBlue, American, Virgin, USAirways, United, Delta, and Alaska Airlines.  The notable exception from this list is Southwest which is not included because it does not share data with GDSs.