Looking forward to the rest of 2015, Hopper anticipates its Consumer Airfare Index will fluctuate slightly over the fall before declining as winter begins. 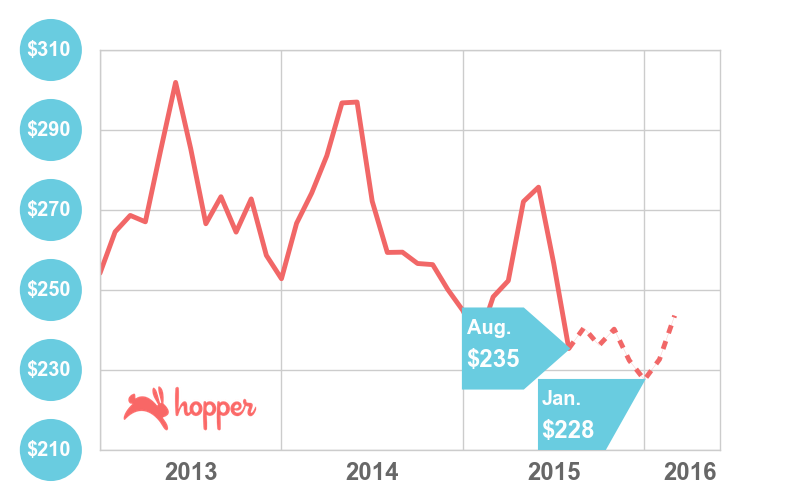 What informs our prediction for the rest of the year? Typically, after prices drop sharply at the end of the summer they begin to stabilize as holiday travel demand replaces summer demand. By December, most holiday tickets are purchased, causing prices to decline again. Since prices so far this year have been cheaper than last year, we expect fall and winter prices to remain cheaper than usual.

Since our index is constructed at a monthly frequency, the implications for holiday travel are not immediately clear. Last year, consumers were searching for Thanksgiving trips a median of 40 days in advance and Christmas flights a median of 48 days in advance. This puts most holiday shopping in October and November, though with shopping spread out over the fall the impact on pricing is not dramatic.

With prices the rest of this year projected to be 7.2% lower than last year, Thanksgiving and Christmas prices are likely to be lower as well. Last year provides a good comparison, as prices from September to December were 4.4% lower than the same time in 2013. This corresponded to a 10% decrease in Thanksgiving prices and and a 6% decrease in Christmas prices — so it’s not inconceivable that prices for holiday flights this year could decrease as much if not more than prices overall. 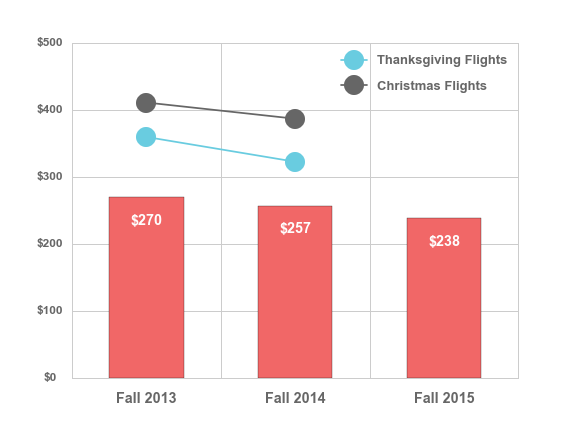 Prices decreased by 8.3% from July to August as summer vacation travel purchasing wraps up. This puts the average price of a round-trip domestic flight at $235, down from $276 in June.

After reviewing the August data and updated July data, we were too cautious with our previous projections. We’ve slightly revised July prices down to $257 from $262, and this revision, along with a stronger than anticipated decline in August, have brought down prices significantly from last month’s index. 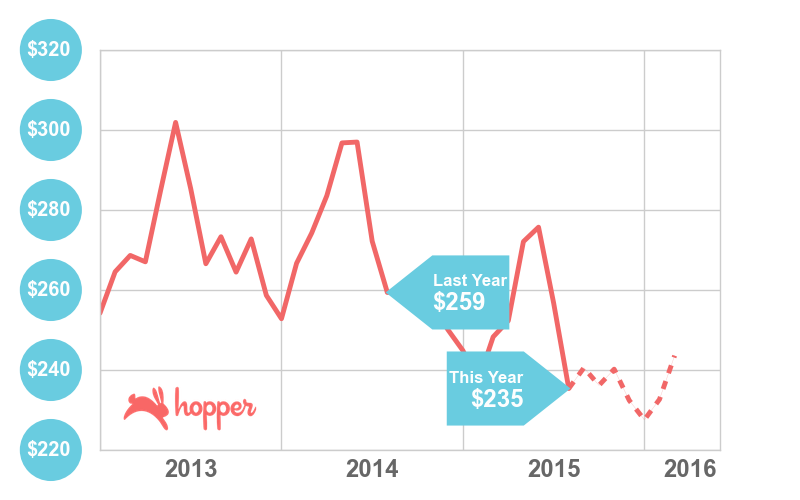 While the current price decrease is to some degree seasonal, it’s noteworthy that the typical fare is 9.3% below August 2014, when it was  measured at $259. Prices this year are well below last year’s levels, and we expect consumers to continue to find better deals through the rest of the year.

In August, consumers were searching for flights a median of 38 days ahead, considerably higher than in July and much higher than what we’ve historically observed this time of year. This puts the typical departure date in the middle of September, after the summer vacation season. Last year at this time, the median search was only 26 days in advance. 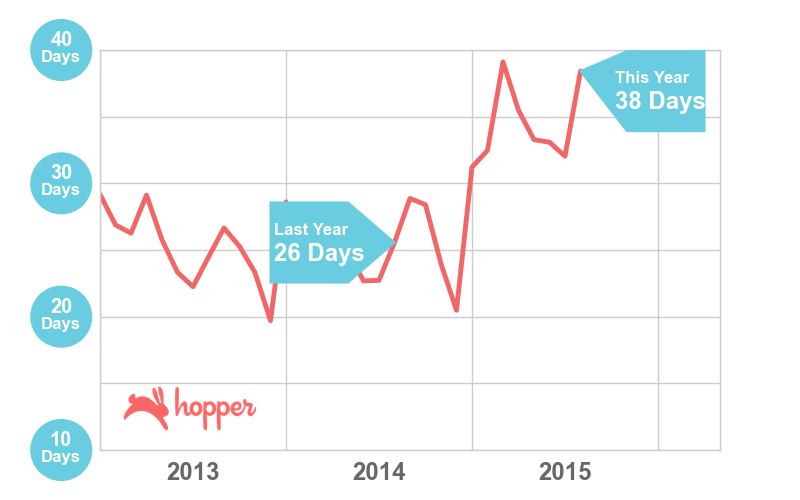 Our Consumer Airfare Index combines search data for every origin and destination in the United States, providing a near real-time estimate of overall airfare prices — unlike other comparable indices that can lag by several months.

Our Consumer Airfare Index represents the price of tickets available for purchase in a given month, not necessarily for travel in that month. Since travel prices are represented in both time dimensions — time of purchase and time of travel — it can be difficult to interpret price dynamics. We use date of purchase because it provides the cleanest aggregation of our price data, and we report it alongside the typical advance purchase date to give an idea of how these prices translate into date of travel.

Other indices simply take the average of all fares to represent overall price, which skews the results toward expensive fares and can give an unrealistic impression of the true cost of flying. We instead use what we consider to be a “good deal” for each route to reflect what consumers should reasonably expect to pay.

Since our index is constructed and forecasted at the origin-destination level, we can also provide comparable estimates for any combination of routes and extract insights on pricing not only across time, but also across different markets. We use monthly passenger data from the Bureau of Transportation Statistics (BTS) to ensure that each domestic route is properly represented in the final index based on its share of total passengers.

First, prices within a given route will fluctuate with the number of passengers.

Second, prices change predictably with the seasons, especially during the peaks of summer and holiday travel. Of course, much of this variation has to do with increased demand, but in peak travel seasons, airlines can raise prices not only because there are more people interested in traveling, but also because the average traveler is willing to pay more for their summer vacation or trip home for the holidays.

Finally, changes in prices may persist, especially if there are underlying conditions pushing prices up or down, as these effects may be spread over several months. Conversely, the opposite may be true — after a big price increase or drop, fares are more likely to change in the opposite direction in future months. Since dynamics like these and the above aren’t always consistent, we evaluate future prices at the origin-destination level to capture the unique properties of pricing for different routes.

Of course, predicting the future is no easy task, and many factors that influence pricing are simply unforeseeable. However, by exploiting the factors that are predictable, like trends in passenger distribution, seasonal variation, and recent price activity, it’s possible to extract insights about the near future of pricing.

Our index generally tracks the BLS’ Airfare Consumer Price Index, which is a related aggregation of the prices consumers pay to fly but is more strongly influenced by more expensive business-oriented travel.