Looking forward, Hopper anticipates its Consumer Airfare Index will bottom out in January before rising again in anticipation of spring: 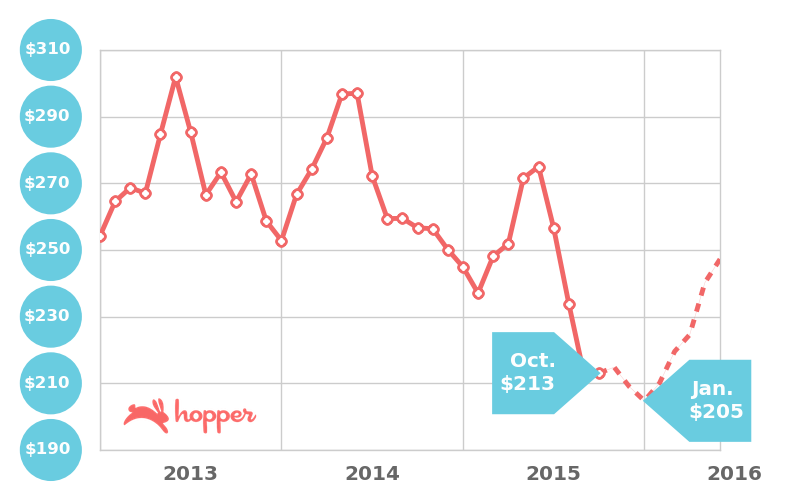 What informs our prediction for the future? Typically, after prices drop sharply at the end of the summer, they begin to stabilize as holiday travel demand replaces summer demand. By December, most holiday tickets are purchased, causing prices to decline again in the new year. This fall, prices continued to tumble through September and only now have begun to stabilize. Going forward, we predict mild price declines through the rest of the year and an increase during the spring months.

Looking back, prices stayed flat between September and October, increasing by just 0.1%. This meant that the average price of a round-trip domestic flight remained at $213.

While it is broadly expected that prices in the fall will be lower than in the summer, it's noteworthy that the typical fare is now 17% lower than in October 2014, when it was measured at $257. Prices this year are well below last year's levels, and we expect consumers to continue enjoying better deals for the foreseeable future. 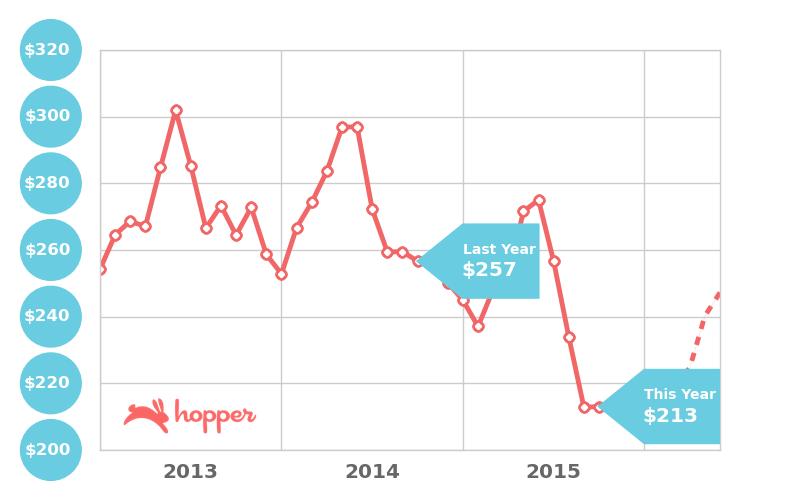 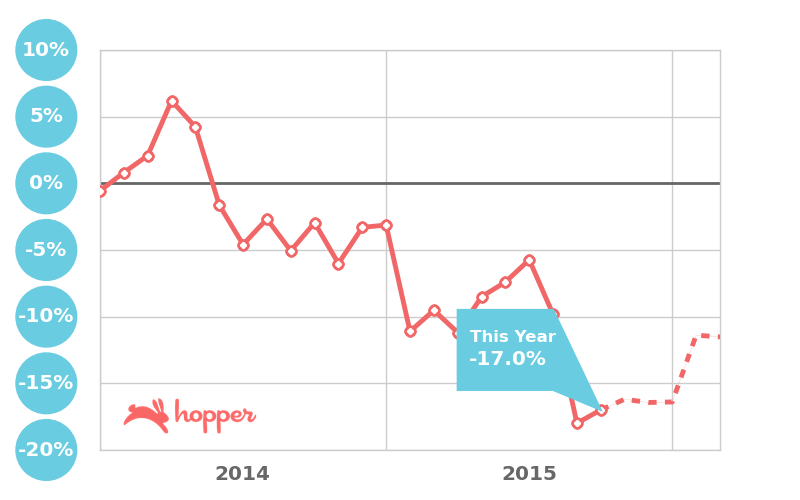 In October, consumers were searching for flights a median of 33 days ahead, which is consistent with what we've observed this year but higher than in years previous. This puts the typical departure date in the middle of November, the beginning of the holiday travel season. Last year at this time, the median search was only 28 days in advance. 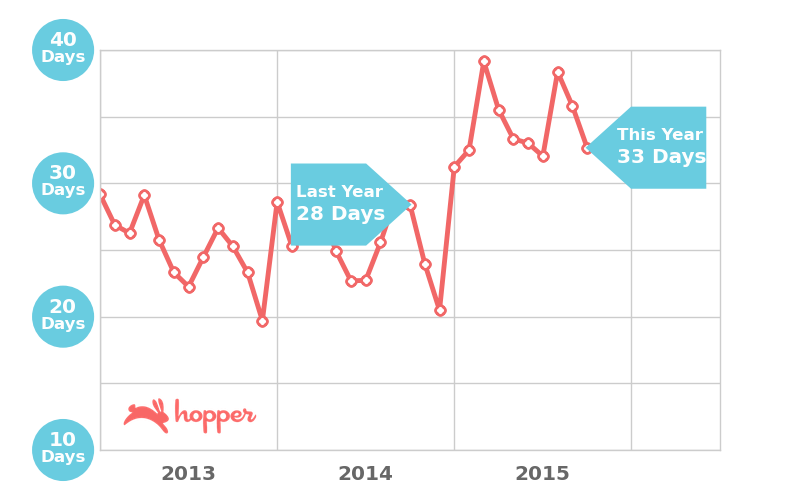 Prices this year have been significantly lower than last year, and predictions indicate that they will continue to stay low through the winter. Lower fuel costs are one factor we've consistently cited as a cause of this year's lower prices and we wanted to dig in deeper and explore to what extent this is driving the great prices consumers are enjoying. While the plunge in fuel prices early this year has not been completely reflected in lower ticket prices, it did coincide with the pattern of lower airfare we've observed this year: 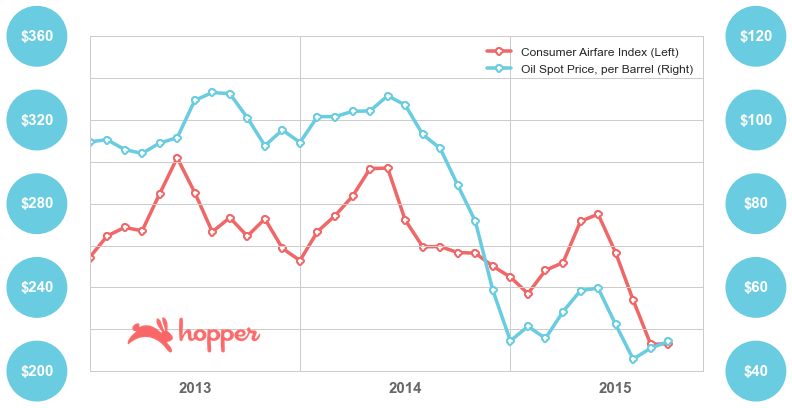 It's evident that the seasonality in oil prices is broadly similar to the seasonality in airfare, with both rising at the same time this summer. While it's no surprise that oil prices rose this summer, it's difficult to disentangle the seasonal effect from the expectation that prices would eventually return to normal. After decreasing again in August and staying low in September and October, however, it's clear that low oil prices are, for now, here to stay.

Biggest Price Increases and Decreases coming up in November

We predict prices nationwide will increase slightly in November, though some airports will experience much bigger price increases. Here are the airports we predict will see the biggest average increase in the price of departing domestic flights in the month of November:

On the other hand, some airports will experience decreases in price. Here are the airports we predict will see the biggest average decrease in the price of departing domestic flights in the month of November:

The map below shows projected prices in November for flights departing from each state, illustrating how prices can vary across the country: 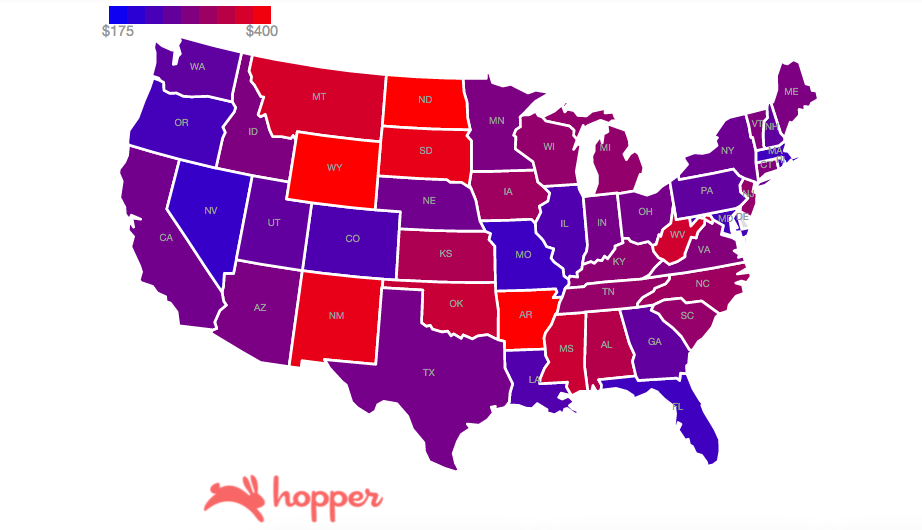 Figure 6: Average domestic airfare this November for flights originating in each state.

The more sparsely-populated states with fewer airports have higher prices. North Dakota tops the list with average prices over $400, while Florida, Nevada, and Illinois are at the bottom with prices under $200. 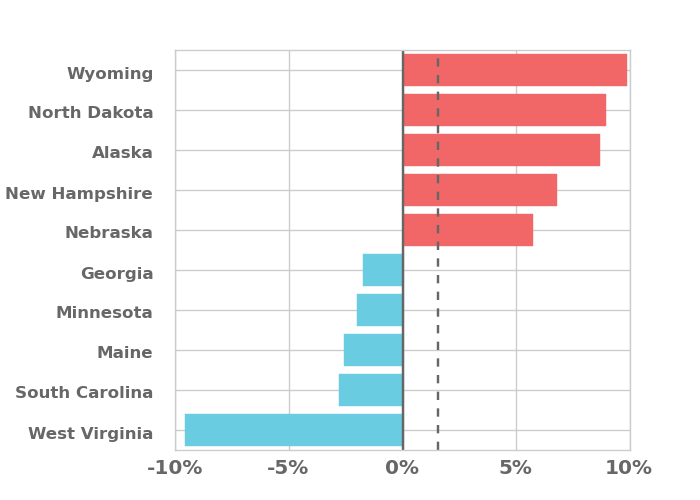 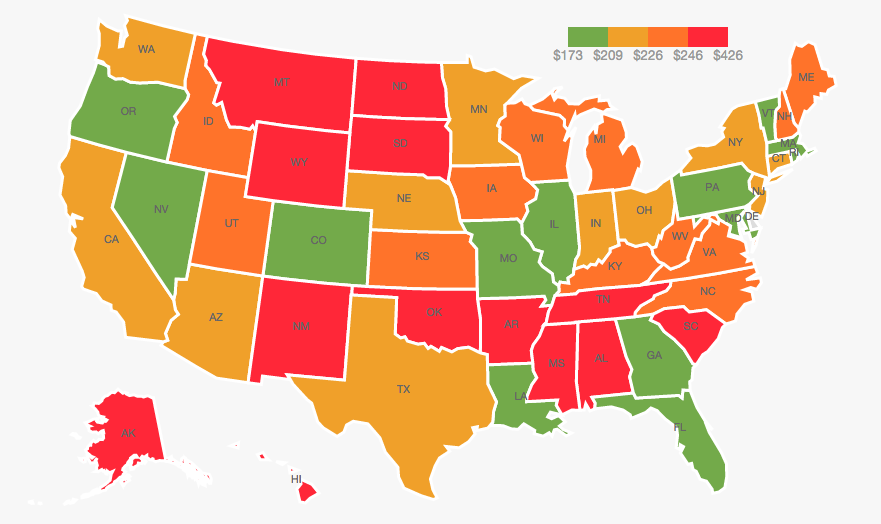 Figure 8: Average airfare for flights arriving in each state, the opposite of Figure 5. The pattern here is similar: it's more expensive to get to more remote states with smaller and fewer airports. To look at average prices for flights from a specific airport, use our interactive consumer airfare index tool at http://www.hopper.com/flights/tools/priceindex/index.html

Other indices simply take the average of all fares to represent overall price which skews the results toward expensive fares and can give an unrealistic impression of the true cost of flying. We instead use what we consider to be a “good deal" for each route to reflect what consumers should reasonably expect to pay.