The top 10 US destinations, for travelers originating in the US, in 2013 were Las Vegas, New York City, Miami, Orlando, Los Angeles, San Francisco, Washington D.C., Honolulu, Chicago, and Seattle. 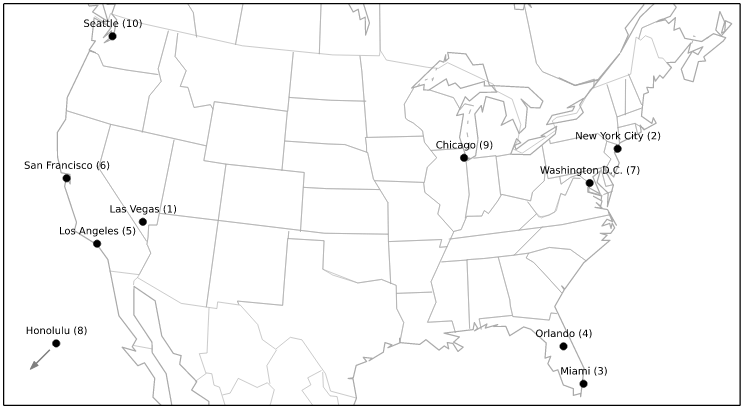 Las Vegas was the most popular destination of 2013.  Seattle is the last on the list with less than one third of the searches of Las Vegas.   Deal prices for the destinations range between $300 and $400, with the exception of Honolulu which is a clear outlier with prices over $600. 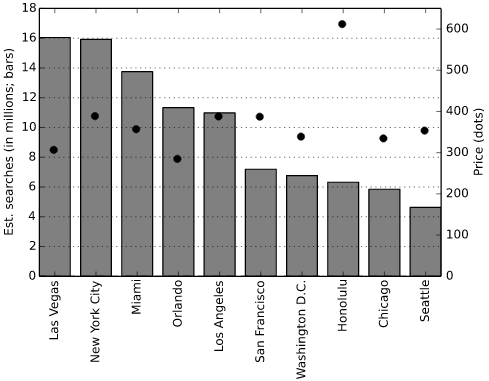 Figure 2: Estimated popularity and deal prices for the top 10 US destinations in 2013.

Popularity of the 10 destinations vary with each month of the year, though depending on the location they peak either in March for spring break, over the summer, or for December holidays.  Every destination, except New York, sees an increase in popularity during March, most likely due to spring break traffic.  Miami, and Orlando see the highest levels of increase during this time .  Every destination, with the exception of Miami, sees an increase in traffic during the summer months with Seattle showing the most prominent peak.  Many of the destinations also see an increase in searches for December travel, with New York, Washington D.C., Miami, Chicago, San Francisco, Honolulu, and Los Angeles reaching peak popularity during this month.

Prices also vary month to month for all the destinations.  Prices are consistently higher, for each destination, during December and over the summer.

Figure 3: Monthly popularity and fare trends for the top 10 US destinations in 2013.

For 7 of the 10 top destination cities, most of the traffic came from New York City, and for the remaining 3, most of the traffic came from Los Angeles.  Each city saw a disproportionate amount of traffic come from one place, and in 6 cases the second place origin city often had half or even less than half the searches of the first.  Lowest fares between the different cities ranged from as little as $100 to as much as $400 dollars.

The data presented in this analysis comes from Hopper’s combined feed of Global Distribution System (GDS) data sources which includes about 10 million queries and 1 billion trips per day.  Demand is represented as the number of queries not actual ticket purchases, and is calibrated across all GDS sources for each market.  Lowest fare is represented by the 10th percentile prices.  For example if the 10th percentile price is $800 dollars it means that only 10% of trips are priced at or below this price.

The analysis presented in this report is based on an a yearly average of data. For each city in this analysis the popularity was represented by the aggregate searches for flights to airports in the city vicinity.  The table below shows the airports that were considered for each of the top 10 destination cities.