Summer is just around the corner and with it one of the most popular travel seasons of the year. With hundreds of flights being cancelled every day due to the widespread grounding of Boeing 737 Max planes, the question on many consumers’ minds is how this will impact their summer travel.

To help consumers navigate the already busy summer season, the data science team at Hopper analyzed our real-time feed of over 25 billion daily flight prices to determine the state of airfare this summer and offer tips for scoring the best deals.

Pricing Trends: Airfare lower than this time 2 years ago

May airfare prices are expected to be in line with 2018 levels and down -6.7% compared to two years ago. The price of jet fuel was down slightly compared to last month, and prices remain low, at 2011 levels. Airfare prices will rise until June, then begin to fall between July and October.

Hundreds of flights are being cancelled every day due to last month's grounding of all Boeing 737 Max planes, which could have an impact on consumers' summer travel plans, especially as the industry is typically more strained in the summer with more flights scheduled per day compared to lower points in the year.

While travelers are concerned about how these cancellations could impact pricing, what is more likely to be affected are specific airlines as they end up shifting share between themselves. Because the total volume of 737 Max seats didn't represent a particularly large percentage of overall capacity (overall, less than one percent, or 0.45%, of daily domestic flights in the US are being impacted by the grounding of the Boeing 737 Max 8 planes), what is more likely to happen is that summer travel prices will continue to be driven by larger economic forces, such as oil prices and competitive pressures, airlines have been adjusting timetables, maintenance schedules, and looking at other backup sources of capacity to minimize the impact as much as possible on their customers.

What this means for consumers is that flights they had already booked for the summer months may have changed slightly in schedule to accommodate the grounding of these aircraft, so travelers who booked earlier in the year should review their itineraries to see if any adjustments have been made. If consumers see something is different and they’re not happy with it, they should contact the company where they made their booking, whether that’s a travel agency (online or brick-and-mortar) or through the airline directly. Airline loyalists may want to book their summer flights sooner than later as airlines most impacted by the crisis may have decreased capacity.

The good news is that consumers should not expect the 737 Max groundings to have a significant impact on summer pricing. In very specific cases, such as Southwest suspending service from Pittsburgh to Los Angeles, prices may go up due to decreased overall capacity and lack of competition on certain routes. However, given the multitude of factors that go into determining the cost of airfare, and considering that the 737 Max seats represented only a small percentage of overall capacity, what is more likely to happen is that summer travel prices will continue to be driven by larger economic forces, such as oil prices and competitive pressures.

Destinations to Watch on Hopper in May

The Hopper app predicts future flight prices with 95% accuracy. If you select the “Watch This Trip” button, Hopper will constantly monitor prices and notify you the instant you should buy.

We calculated popular destinations for upcoming travel where you could save most by watching prices on Hopper. If you’re interested in visiting any of these destinations in the next few months, we recommend setting your watch on Hopper now so that you can be alerted about price drops this month.

Growth in capacity for US major and LCC carriers comes despite the temporary grounding of 737 Max planes beginning in March of this year. Although the grounding of these planes has impacted carrier capacity, overall domestic capacity remains higher in May 2019 than in the previous year. Foreign low cost carrier capacity is significantly lower than last May, due in part to the bankruptcy of Wow Airlines, a key Icelandic carrier until all routes were cancelled this past March. 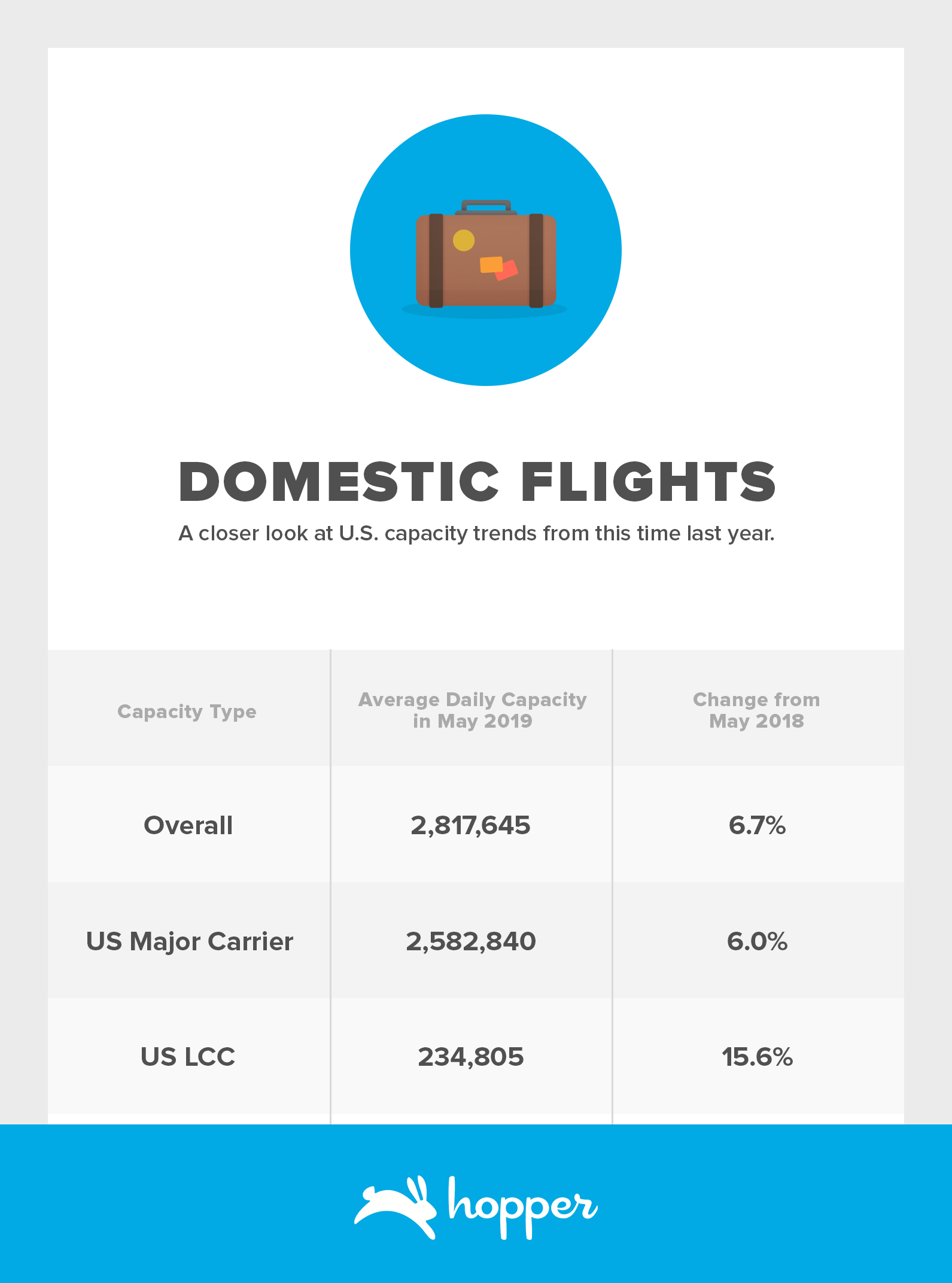 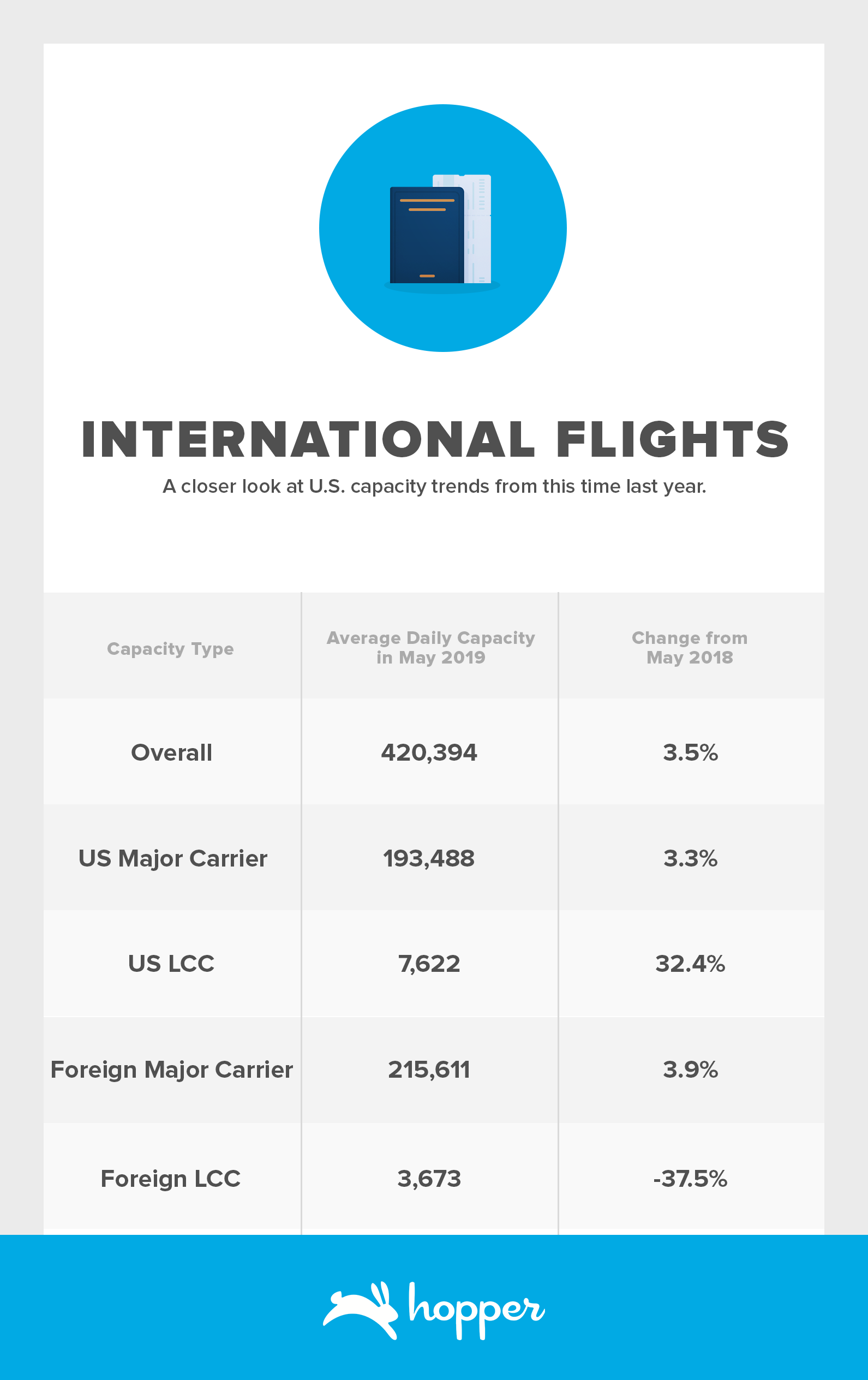 Other indices simply take the average of all fares to represent overall price which skews the results toward expensive fares and can give an unrealistic impression of the true cost of flying. We instead use what we consider to be a “good deal” for each route to reflect what consumers should reasonably expect to pay.

Second, prices change predictably with the seasons, especially during the peaks of summer and holiday travel. Of course, much of this variation has to do with increased demand - but in peak travel seasons, airlines can raise prices not only because there are more people interested in traveling, but also because the average traveler is willing to pay more for their summer vacation or trip home for the holidays.

Finally, changes in prices may persist, especially if there are underlying conditions pushing prices up or down, as these effects may be spread over several months. Conversely, the opposite may be true - after a big price increase or drop, fares are more likely to change in the opposite direction in future months. Since dynamics like these and the above aren’t always consistent, we evaluate future prices at the origin-destination level to capture the unique properties of pricing for different routes.

Of course, predicting the future is no easy task, and many factors that influence pricing are simply unforeseeable. However, by exploiting the factors that are predictable, like trends in passenger distribution, seasonal variation, and recent price activity, it’s possible to extract insights about the near future of pricing.

Our index generally tracks the Bureau of Labor Statistics’ Airfare Consumer Price Index, which is a related aggregation of the prices consumers pay to fly but is more strongly influenced by more expensive business-oriented travel. It’s also released on a more delayed schedule than our index.