Where are Travellers Going?

Most Popular Searches (Where are most people thinking of going?)

Most Popular Bookings (Where are Hopper users headed?)

Since Hopper users tend to skew towards younger leisure travelers, our bookings also tend to reflect this demographic’s interests.

When is Demand Clustering in 2021?

How far are travellers booking in advance?

The price of jet fuel according to the EIA is currently $2.16/gallon, exceeding 2019 prices and continuing its steady upward trend from last year. This marks a 60% increase in jet fuel prices from $1.34/gallon at the start of 2021. We expect higher jet fuel prices to contribute to higher consumer airfare for 2022. 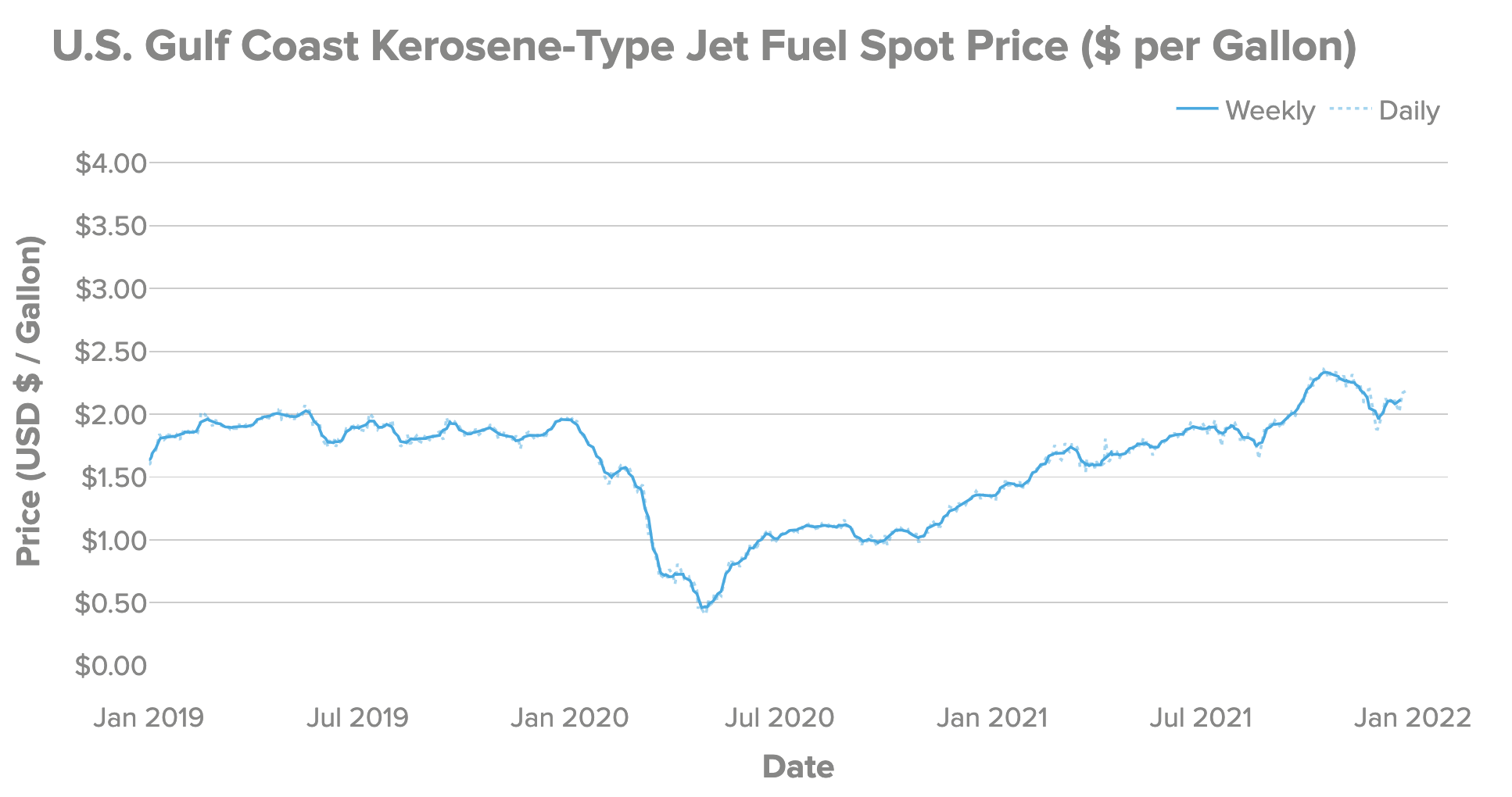 The TSA was observing around 84% of 2019 traffic at checkpoints in early December approaching the holiday season. Amid Omicron, passenger traffic decreased to 80% of 2019 levels in late December, and has started the year off at ~82% of January 2019 levels.

We forecast an average 7% increase in airfare each month until June, with the highest increases in airfare in March. This amounts to a 35% increase in airfare from current prices by the end of May. After briefly catching up with 2019 pre-pandemic prices in early December 2021, we expect to again see 2019 prices around April 2022.

The rate of the increase in domestic airfare is significant, but is comparable to what we observed following the Delta variant wave in Fall 2021. There are several factors we expect to drive this increase in airfare:

International airfare for January 2022 is the lowest it has ever been in January at just $649/round-trip currently. Similar to domestic airfare, this is due to the combination of the Omicron variant and seasonally lower demand after the holiday season. We began seeing international airfare drop in the last week of November, when the Omicron variant was classified as a variant of concern by the WHO. Prices have been especially volatile between the Delta and Omicron variant waves, swinging nearly $200/round-trip twice over four months.

We think international airfare has likely bottomed out in mid-January, and will increase from here as demand recovers. Without a more definitive recovery in the Trans-Pacific segment, it’s unlikely we’ll see a full return to 2019 prices in the coming months. However, we do expect airfare to increase an average of ~5% each month until June, with the most significant increases between now and March as demand recovers following the Omicron variant wave. Before Omicron, we had seen significant improvements in travel to Canada and Europe compared throughout 2021.

Factors Contributing to the Rise in International Airfare

In general, the factors affecting domestic airfare are also very much the same ones at play in the international segment.

Most Popular Methodology:  Hopper collects, from several Global Distribution System partners, 25 to 30 billion airfare price quotes every day from searches happening all across the web. Here we simply rank destinations by which ones have received the most searches in the last 6 weeks, filtering for winter departures dates (January 15th to March 15th, 2021). Think of most popular as a measure of “Where are most people thinking of going?” Note that this does tend to favor larger cities.

Domestic: Orlando, FL (#1), Las Vegas, NV (#2), and Miami, FL (#3) topped the most popular destinations in searches for domestic flights. With a good deal airfare of just $139/round-trip, Miami was one of the most affordable domestic destinations for Winter 2022, 40% off pre-pandemic 2019 prices this time of year. 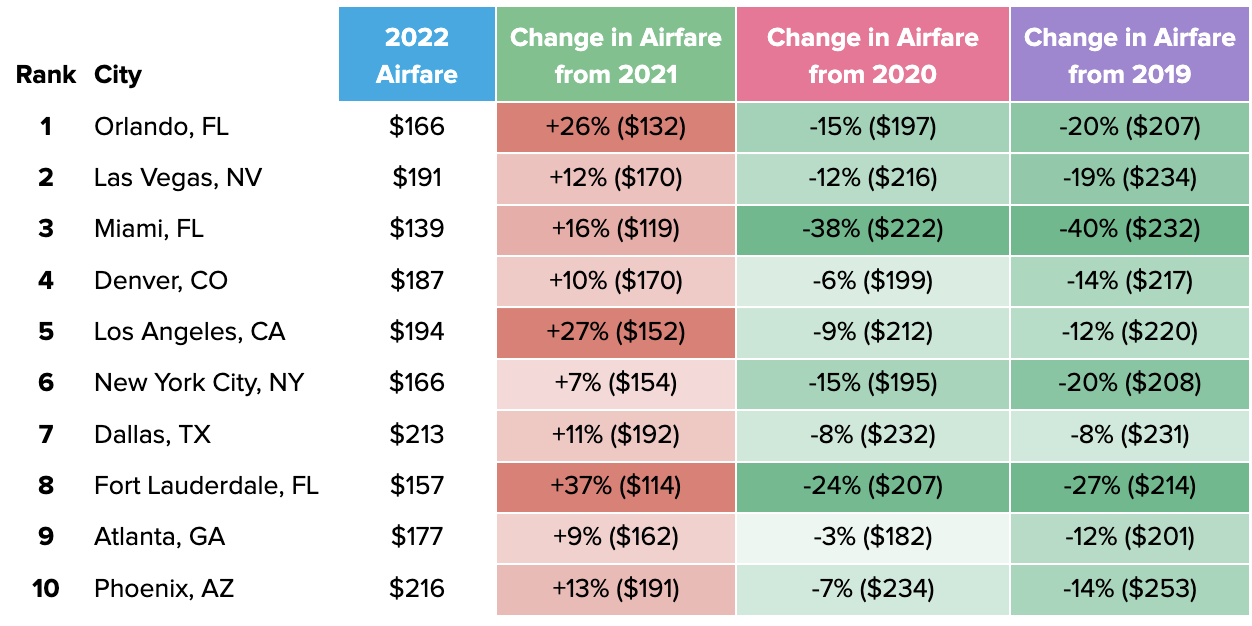 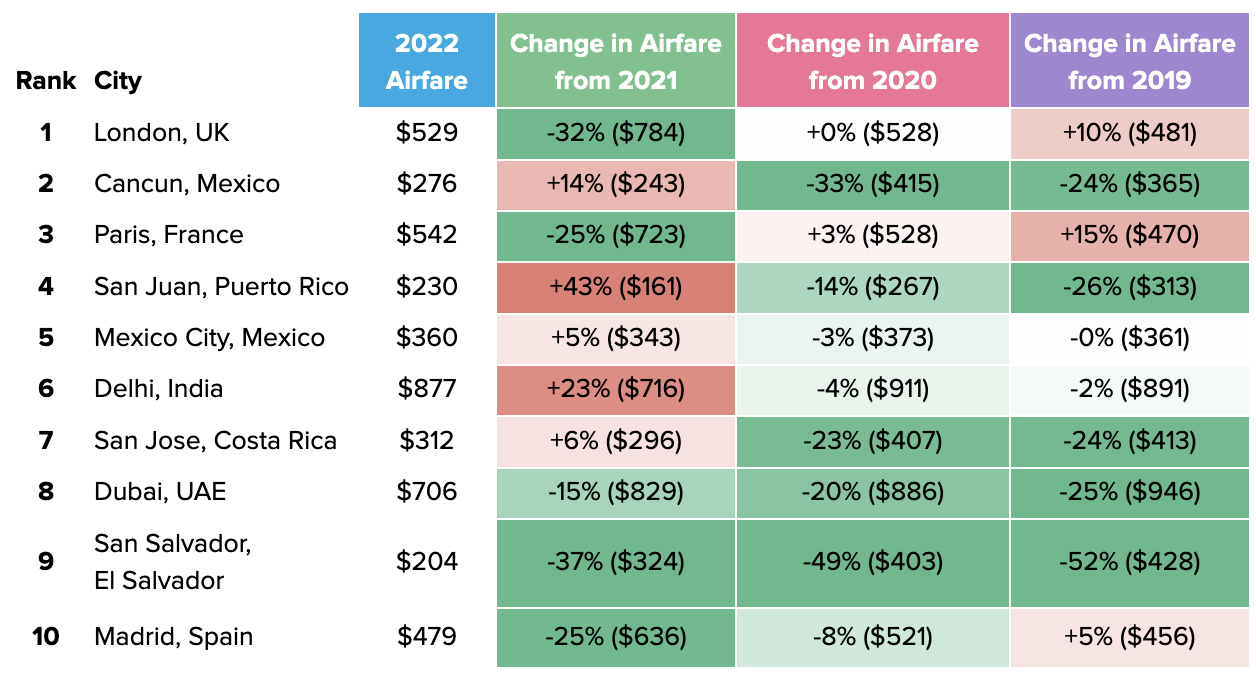 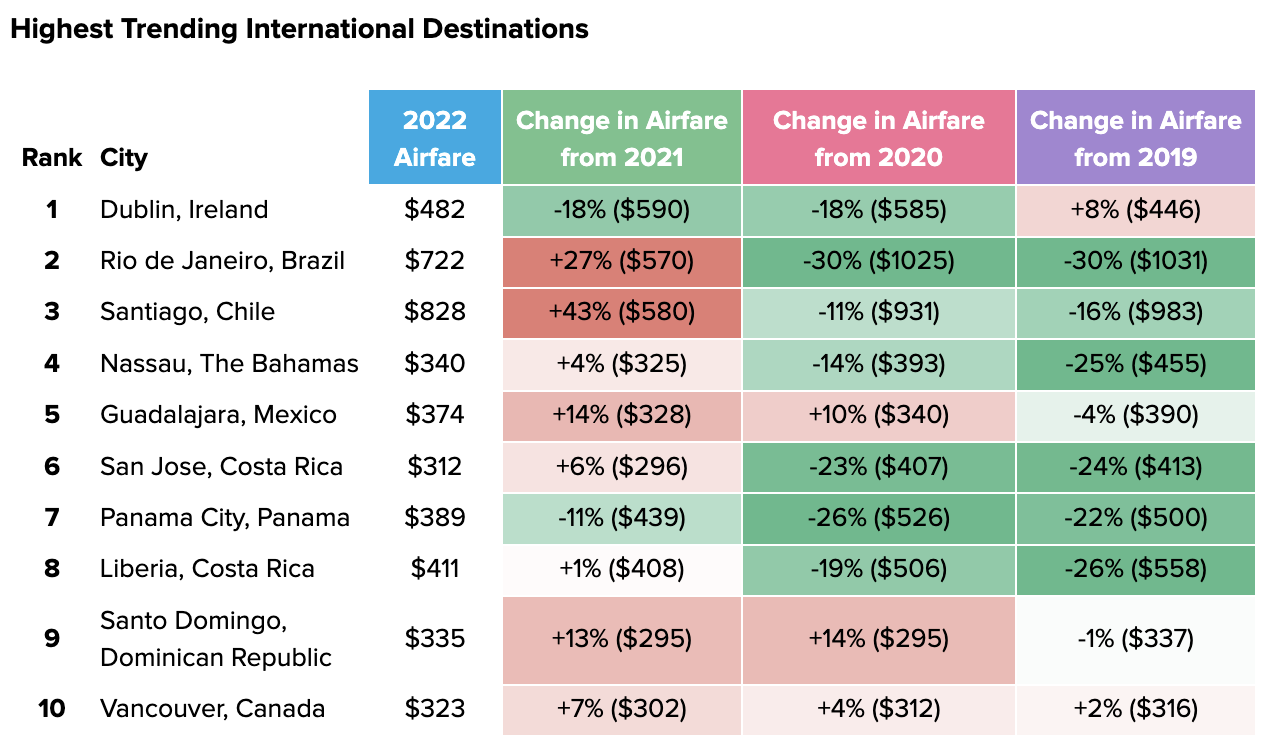 Please note: Since Hopper users tend to skew towards younger leisure travelers, our bookings also tend to reflect this demographic’s interests. We’d suggest “Most Popular in Searches” above for popular destinations more representative of the overall population. 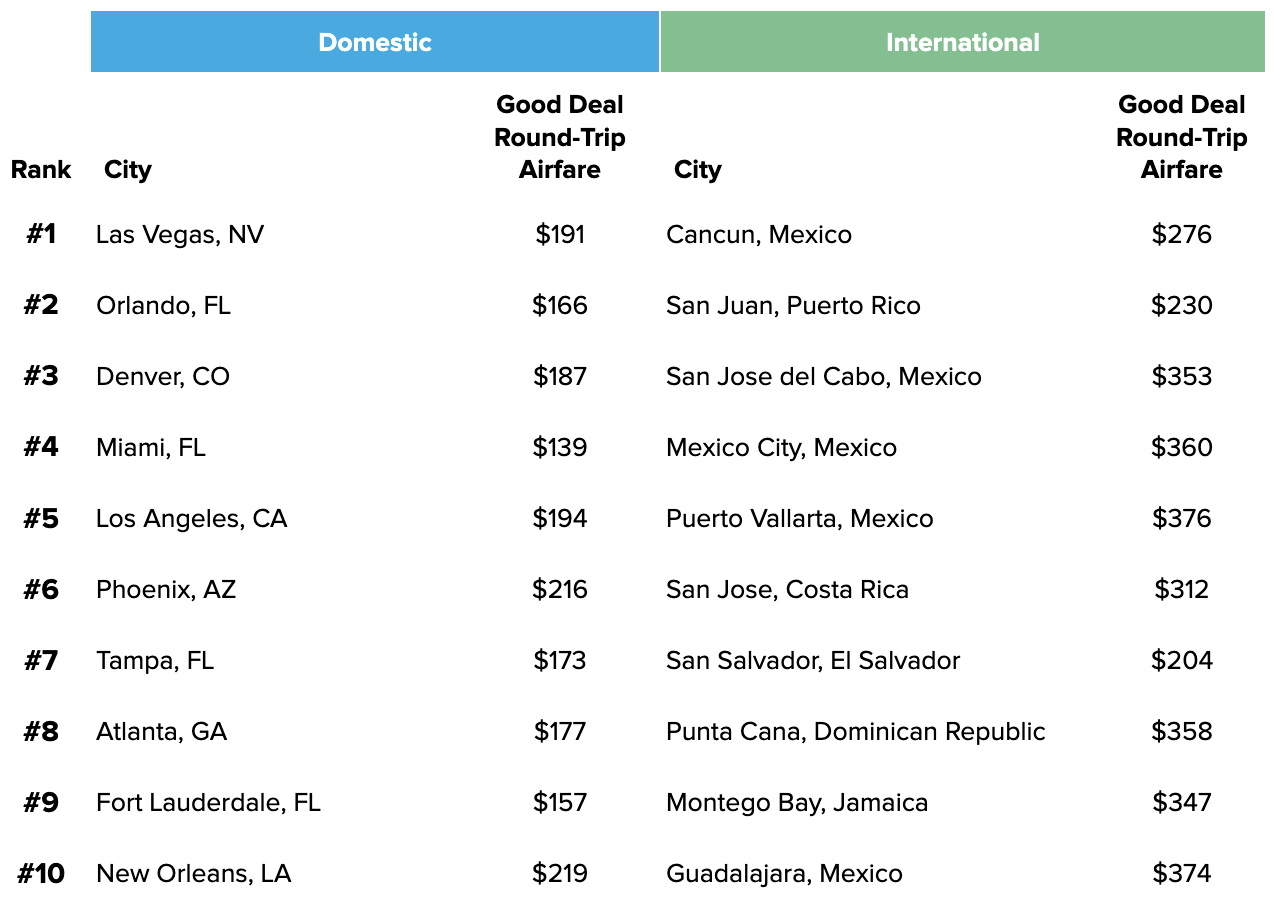 Where is Demand Clustering?

We took a look at which dates tended to have higher than usual search volumes for this year, to get an idea of when we might start to see travel demand really pick up in the coming months.

The weekend following Valentine’s Day and mid-March appeared to see a few instances of higher than expected search volume. This might suggest a rough timeline for when travellers are expecting the situation with the Omicron variant to improve domestically.

For international destinations, it seems travellers are generally eyeing mid-March. Canada was one of the only international regions seeing earlier demand for February. Canada also appears to be on travellers’ minds for summer trips this year.

How far in Advance are Travellers Booking Flights?

Since Summer 2020, we’ve seen travellers booking closer to their date of departure. This makes sense in an environment where there can be uncertainty about how travel regulations and the pandemic itself will progress further down the line. How far travellers book in advance is a signal of traveller confidence, and here we compare it to pre-pandemic levels for context.

Travellers are booking domestic flights 35 days in advance on average, down from 45 days this time in January 2019, but up from 30 days this time last year in January 2021. Historically, we have usually seen a pickup in advance towards the end of December as travellers make plans for the Spring and Summer of the following year. Likely due to the Omicron variant, this usual seasonal increase was much more subdued this year. 29% of travellers are currently booking less than two weeks ahead of departure, which while an improvement over 38% who did so in January 2021, is still significantly higher than the 17% who did so in January 2019.