Earlier this week, American Airlines and United Airlines reported that they would extend the grounding of their fleets of 737 Max planes through to the beginning of November. This extension of the grounding timeline is the fourth to be announced by these domestic airlines, and many travelers question if the 737 Max fleets will remain out of the skies into 2020.

Although the Max 8 represented a larger proportion of the American, Southwest and United Airlines fleets, the planes themselves accounted for less than 1% of daily domestic capacity nationally. Despite the continuation of the groundings, overall domestic US capacity will continue to grow into August 2019 (+4%) driven by both Low Cost Carriers (+17%) and Major Carriers (+2%).

Though capacity is likely to remain higher than 2018 levels through the end of the summer, it’s possible that the capacity growth we’ve seen these past few years will be hindered by the Max 8 groundings. Capacity has been growing year over year as more travelers take to the skies, and airlines have responded by planning their future capacity and ordering planes a year or more in advance in preparation to meet rising demand. Given the uncertainty around the return of the max 8 to the skies, and that many of the impacted airlines  had more Max 8 planes on order to incorporate into their service next year, it’s possible capacity constraints could trail into 2020, and in some cases, drive up prices.

Across the pond, some European carriers are feeling the strain of the Boeing 737 Max 8 groundings.  Low cost carrier, Ryanair announced this week that in 2020 they will be introducing around half of the supply of new planes they had expected due to the Max 8 grounding, with lower capacity than expected beginning in November 2019. After two consecutive years of lower prices on travel to Europe driven in part by low cost carriers like Ryanair, there is potential that prices in 2020 may not be as favorable for international travelers.

What does this mean for Holiday travel? (Thanksgiving and Christmas)

Airlines with grounded 737 Max 8 planes have worked to manage capacity this summer by shifting capacity to ensure coverage of high demand routes by reducing/suspending daily service on lower demand routes. The highest demand routes which have been most protected during this summer are typically routes from large hubs to large hubs, routes like New York to Los Angeles or Chicago to Atlanta. Lower demand routes experiencing cancellations and service suspensions are more likely to be routes to and from smaller airport hubs that see lower daily demand.  For example, Southwest suspended service from Pittsburgh to Los Angeles and American Airlines suspended service from Oakland to Dallas Fort-Worth for the remainder of the summer.

In the short term, this reallocation of capacity has worked relatively successfully, as summer travel demand is typically concentrated around high demand routes from large hub to large hub. During peak holiday seasons, however, there is more demand for travel from larger hub airports to smaller, local airports as travelers head home for the holidays. It’s possible that travelers planning trips at Thanksgiving and Christmas will have more difficulty finding a great deal on flights home for the holidays if there is less capacity and less carrier competition on their particular route.

Early indications of this impact can be seen on one route which saw a reduction in service earlier this summer, Pittsburgh to Los Angeles, where daily service was cancelled by Southwest as they reallocated capacity on domestic routes due to the grounding of the Max 8. Though prices on this route remained relatively stable compared to 2018 levels through the summer, prices for departures beginning in September through the holidays are expected to be anywhere from 22% to 30% higher than in the previous year. 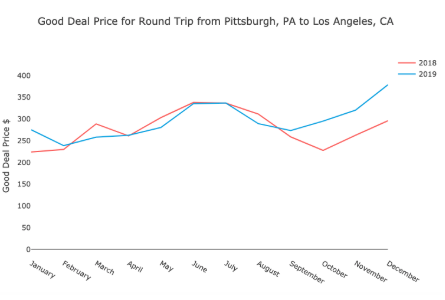 What you should know about booking flights home for the holidays this year: